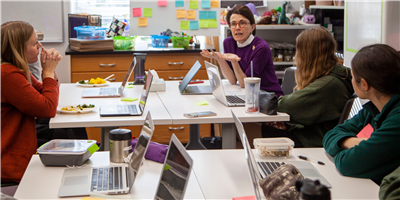 Evolutionary biologist, cardiologist, Archer alumna parent, and former Archer Board of Trustees Chair B. Natterson-Horowitz is partnering with the school to continue her research in evolutionary biology.
Dr. Natterson-Horowitz recently published Wildhood, which uses an evolutionary frame to explain humans' developmental transition from puberty to adulthood. The New York Times bestselling author keynoted the 2019 Nobel Conference in Stockholm, Sweden, presenting examples of naturally occurring resistance among wild animal species. She is a visiting professor at Harvard University's Department of Human Evolutionary Biology and co-director at the UCLA Evolutionary Medicine Program.
Under her direction as Researcher in Residence, Archer students will identify examples of resilience and capacity among wild animal adolescents. The collaboration includes comparing menstruation in humans and other species to explore how various medical phenomena and conditions in humans have evolved across the animal kingdom. This is the first time she is collaborating with high school students on research.

"Archer is remarkable in its commitment to provide innovative, evidence-based, real-world, research experiences for its students. I am thrilled for the opportunity to help young scientists – girls especially – find their voices and explore their interests in evolution, conservation, and health," she said.

Dr. Natterson-Horowitz will speak to Archer's faculty and parent community in January. She served on the Archer Board of Trustees between 2008 and 2016. Her daughter, Jennifer, graduated from Archer in 2014.

Data from the National Science Foundation shows men and women perform equally well in math and science on standardized tests, and yet women continue to be underrepresented in science and engineering fields. Only 28 percent of the workforce is comprised of women, who make up half of the college-educated workforce. Less than 30 percent of the world's researchers are women, according to UNESCO.

Dr. Natterson-Horowitz's research will give Archer girls the opportunity to tip the scale. Archer students who choose to do the research will be invited to submit their findings to present at the International Society for Evolutionary Medicine and Public Health's annual meeting in Athens, Georgia in 2020.

"Dr. Natterson-Horowitz has been a pioneer in evolutionary biology and she has always made it a point to help younger scientists find their own niche in the field," Head of School Elizabeth English said. "I am excited to see where her partnership with our students leads."