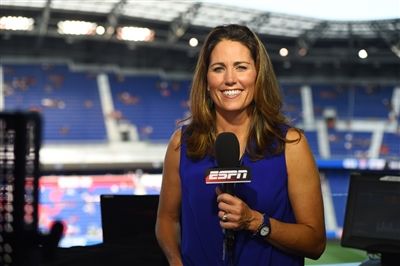 Former Captain of the U.S. Women’s Soccer Team to Address Archer’s Graduating Class of 2020
Los Angeles, CA (May 27, 2020) - Julie Foudy, former captain of the U.S. Women’s Soccer Team, two-time Olympic Gold Medalist, and two-time World Cup Champion, will deliver The Archer School for Girls’ commencement address on May 29, 2020.
One of the most accomplished female soccer players in the world, Foudy currently serves as an analyst and reporter at ESPN where she provides commentary and features for espnW. Before her work at ESPN, Foudy led a successful career on the USA National Team for 17 years where she participated in four Women's World Cups and three Olympics for the USA Team. Foudy was inducted into the US National Soccer Hall of Fame in 2007, alongside longtime teammate and friend, Mia Hamm. Julie and Mia were only the 6th and 7th women ever to be inducted into the Hall of Fame and the first and only ALL FEMALE induction class.
Most important to Foudy, she has made a difference off the field as well. Julie was the President of the Women's Sports Foundation from 2000-2002, served on the Women's Sports Foundation Board of Directors for 7 years and was a WSF advocacy consultant for two years, with a focus on Title IX, childhood obesity, and athletes' rights issues. Julie has also been instrumental in a number of women's rights and child labor issues around the world. She serves as an advisory board member for espnW, Positive Coaching Alliance, and Steel Sports Inc., and was a global spokeswoman for Global Girl Media, a non-profit helping young women around the world find their voice through journalism.

“We are thrilled to have Julie Foudy deliver the commencement address to the Class of 2020,” Head of School Elizabeth English said. “Ms. Foudy has been an incredible trailblazer and leader on and off the field. Our girls are excited and grateful to have such an intrepid commencement speaker in such a challenging year.”