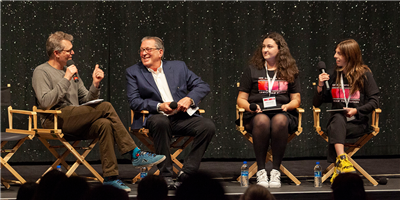 The Archer School for Girls presented its eleventh annual Archer Film Festival empowering young, underrepresented voices in film on Wednesday, April 20, 2022. The event, held at the Beverly Hills Fine Arts Theatre, included a screening of finalist films and featured a Q&A with President and Founder of The Kerner Entertainment Company Jordan Kerner and screenwriter David Ronn. Festival organizers received more than 400 student-produced film submissions from 56 countries around the world. Event sponsors included The Kennedy/Marshall Company, Bad Robot Productions, Mark Gordon Pictures, Tara and Marc Guggenheim, and Gettin’ Rad Productions.
Jordan Kerner is president and founder of The Kerner Entertainment Company, which is committed to high-quality, value-oriented, provocative entertainment. The Kerner Entertainment Company’s films have earned over $3 Billion at the box office. Most recently, Jordan Kerner was engaged to develop and produce “Clifford the Big Red Dog,” a hybrid feature film, for Paramount Pictures, which was released in November of 2021. He previously produced the billion-dollar franchise of “The Smurfs” 1 and 2 as well as the all-animated, “Smurfs: The Lost Village,” via Columbia Pictures. Kerner’s other previous films include “Charlotte’s Web” with Paramount Pictures and “Fried Green Tomatoes,” “When a Man Loves a Woman,” “Three Musketeers,” “George of the Jungle” 1 and 2, “The Mighty Ducks” trilogy, “Inspector Gadget” 1 and 2, “Less than Zero,” “Up Close and Personal,” “The War,” “Snow Dogs,” and “Red Corner” with the Avnet/Kerner Company. Kerner’s films have received nominations for or have won Academy Awards®, Emmy Awards, Golden Globe Awards, BAFTA Awards, The People’s Choice Award, The Critics Choice Award, NAACP Award, The Diversity Award, and more. Kerner was named a Billion Dollar Producer by Variety Magazine in July 2013 and was presented the Producer of the Year Award by the Hollywood Entertainment Museum at its 2006 Legacy Award event.
David Ronn is a television and feature film writer and producer. Along with his writing partner, Jay Scherick, Ronn served as a staff writer on “Mr. Rhodes.” From there, Ronn and Sherick segued to serve as writer/producers for three years on “Spin City.” At the same time, the duo also pursued a feature career, writing two “spec” scripts, “National Security,” and “Serving Sara” both of which were produced. While continuing to work in television, the two expanded their feature career working on a number of projects including “I Spy” starring Eddie Murphy and Owen Wilson, “Guess Who” starring Ashton Kutcher and Bernie Mac, and “Norbit” again with Eddie Murphy. They’ve also written extensively in the family entertainment space, including “Zookeeper” with Kevin James, “The Smurfs” franchise, and most recently “Clifford the Big Red Dog.” The two continue to write for television, although their focus has been on feature rewriting and original feature film writing and producing.
The Archer Film Festival is a student-run and student-led event. “After virtual festivals for the past 2 years, it was incredibly exciting to host the 11th annual Archer Film Festival in person at the Fine Arts Theatre,” Film Festival Leadership Board member and Archer senior Olivia Jarvie said. “We very much enjoyed talking with our two amazing panelists, Mr. Jordan Kerner and Mr. David Ronn, and learning more about their experiences as producers and writers in the film industry."
The gender gap still persists in the film industry. According to a 2021 report from the Center for the Study of Women in Television and Film, women comprised only 25% of all directors, writers, producers, executive producers, editors, and cinematographers working on the top 250 domestic grossing films. After reaching historic highs in 2020, the percentages of women working as directors on the top 250 domestic grossing films, specifically, declined slightly in 2021 from 18% to 17%.
The Archer Film Festival strives to bridge that divide by empowering and highlighting young filmmakers who share the goal of advancing the artform by showcasing work from students whose perspectives are rarely seen or heard. Throughout the development of the Festival, student filmmakers are given access to insider industry knowledge, further strengthening their foundation to effectively pursue careers in the field.
“The Archer Film Festival was created to inspire our student filmmakers, give them hands-on experience in the industry, and to help achieve gender parity in front of and behind the camera,” Head of School Elizabeth English said. “Eleven years later, we see that much still remains to be done in the industry, and I am proud of the contribution that our students are making with this festival.”