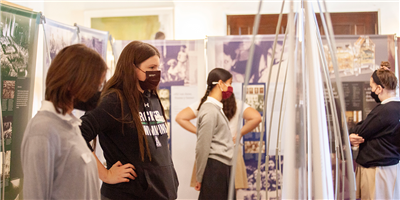 International Holocaust Exhibit Partners with The Archer School for Girls

Designed for students in middle and high school, “Anne Frank: A History for Today” first premiered in Vienna in 1996 and aims to inform visitors about the history of the Holocaust; explore cultural, ethnic, religious, and political differences; challenge visitors to think about tolerance, mutual respect, human rights, and democracy; and examine the ways in which people can contribute to a society where people’s differences are respected.

The exhibit, which consists of 32 panels, has been presented at more than 300 schools around the world. The Archer School for Girls is bringing this exhibit to the West Side area of Los Angeles on the heels of Yom HaShoah (Holocaust Remembrance Day, observed by many of the Jewish faith) and as we look ahead to Anne Frank’s birthday and the anniversary of the publication of “The Diary of a Young Girl.”

Students at The Archer School for Girls had the opportunity to delve further into “Anne Frank: A History for Today” by participating in the exhibit’s student docent training program. On Wednesday, May 4, and Thursday, May 5, student volunteers at The Archer School for Girls trained with Criss Beyers and Devin Randolph from the Anne Frank Center at the University of South Carolina and Morgan Dixon from Anne Frank LA to lead tours of the exhibit and engage in peer education. Students learned about the exhibit’s background, how they can communicate its content to their peers, and how they can introduce more general themes such as tolerance and discrimination.

Archer’s Jewish Student Union has been involved in preparing for the exhibition, with many student leaders participating in the training program. President of the Jewish Student Union Lilly Dembo noted, “I’m really excited how this is being brought to Archer. Holocaust education is something that is being discussed more and more, so bringing it to a school and having students teach other students is very important.”
The exhibit’s goals of teaching tolerance and mutual respect take on increased significance against the backdrop of the recent rise in hate crimes. Hate crimes, crimes motivated by bias against race, religion, disability, sexual orientation, ethnicity, gender, or gender identity, are at the highest level in more than a decade, according to a 2021 report from the FBI. Spectrum News 1 NY reported in February 2022 that hate crimes rose 44% last year across 16 of the biggest cities in the country, with Los Angeles and New York reporting the highest and second-highest amounts.

“I’m immensely proud of our students and their commitment to bringing Anne Frank’s story, and the story of the Jewish people during the Holocaust, to the Archer community and the greater public,” said Head of School Elizabeth English. “Understanding genocide and the forces that give rise to it is essential to helping prevent such atrocities in the future.”